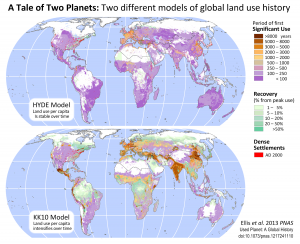 Is the Anthropocene recent? Defined solely by the accelerating impacts of an industrial society that threatens the future of both humanity and the biosphere (Barnosky et al., 2012, Rockstrom et al., 2009)? A closer look at the history of human use of land yields a very different story. Today in PNAS, my colleagues and I present a new global history of land use suggesting that human transformation of the terrestrial biosphere was already globally significant more than 3000 years ago (Ellis et al., 2013).
The evidence, detailed in the paper (pdf here; PNAS here), is of three kinds. First, historical predictions from a new spatial model of global land use history developed by coauthor Jed Kaplan (the KK10 model; Kaplan et al., 2011), were compared against an earlier model that has become the accepted reference for most global change scientists: the HYDE model of coauthor Kees Klein Goldewijk (Klein Goldewijk et al., 2011). Unlike prior global models of early land use, Kaplan’s model was derived from nonlinear empirical relationships observed between per capita land use and population density over the long term- relationships that agree with widely accepted theories of land use intensification in traditional smallholder agricultural systems (earlier blog post on this). When these two models are compared (see figure above, and the paper), their differences are so striking that they might as well come from two different planets: one with ancient and extensive human use of land (KK10), one with land use changing mostly in recent centuries (HYDE).

To explore whether existing theories of land use intensification could explain land use change processes across the entire span of the Holocene, from the late Pleistocene up to the present day, we reviewed the extensions of intensification theory found in archaeology, environmental history, geography and other disciplines that study human/environment relationships. From this, it became clear that intensification theory could readily be broadened to include a wide range of adaptive practices and land use systems that have enabled increasing human population densities to drive increasingly productive and efficient use of the same land over time to support growing populations over the long term. Long before agriculture, our ancestors had already learned to support greater populations from the same land by pre- and proto-agricultural land use intensification practices, including dietary broadening (eating across the food chain), the use of fire to enhance foraging success, food processing to enhance nutrient availability (cooking, grinding, etc.), and the propagation of useful species. Intensification of land use then continued across agriculture’s development from shifting cultivation to continuous cropping, the moldboard plow, synthetic chemicals and mechanization and a wide array of other land use systems.

Finally, we examined the evidence from archaeology, paleoecology and agricultural history to assess the plausibility of the two different models of early land use history. For archaeologists, this was not new territory- especially for coauthor Dorian Fuller, who studies the processes of plant domestication. Advances in archaeological science continue to reveal ever earlier and deeper roots of human shaping of biology and environment. Evidence from paleoecology, including early use of fire to clear land, appears less coherent, but in general agrees with findings from archaeology. The picture overall is becoming clearer of a terrestrial biosphere profoundly transformed by humans more than three thousand years ago.

The most plausible history of our planet is one of early transformation of the terrestrial biosphere by human use of land, with land use intensification processes playing a central role in regulating long-term changes in human-environmental relationships. However, our results are not the final word on Anthropocene history. Conclusive validation will require a major, unprecedented effort to integrate the local observations of archaeologists and paleoecologists across the world into a robust quantitative assessment of the global history of human populations and their use of land. (yes- we are working on it!)

The human role in Earth history matters- even to the present. Confucius is said to have said (is that postmodern enough?) “Study the past if you would define the future”, and Churchill: “The farther backward you can look, the farther forward you are likely to see.”

The most plausible history of our planet has us living on a used biosphere sustained by the efforts of countless generations of our ancestors. We have always shaped the biosphere and lived on the results. We can only hope to get better at it as we move deeper into the Anthropocene.

Essay on conservation implications of the work:

@The Breakthrough Insitute: “The Long Anthropocene: Three Millennia of Humans Reshaping the Earth