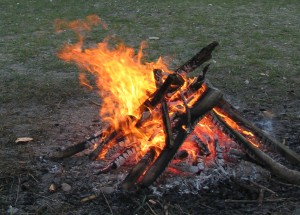 Humans have been using fire since prehistory- indeed, it is one of our defining characteristics -distinguishing us from all other species.

There is little doubt that burning of forests to attract game and later, to clear land for agriculture have had long-term global impacts on climate and the biosphere. There is also much evidence of serious ecological consequences to the sustained use of fuelwood and charcoal for household stoves. But until now, the ecological impacts of campfires have not been well studied.

Now a study on the ecological impacts of fireplaces in Swiss recreational forests has demonstrated that firewood collection depletes woody debris, leading to a loss of habitat for plant species in their vicinity (Hegetschweiler et al. 2009). The effects were both on species diversity and density of vegtatation, and included, as wood be expected (pardon the pun), effects caused by the harvest of woody debris and also trampling, over areas of 150 - 200 m2 around each fire site.

While this study discusses only the implications for nature conservation and forest managment, I can only think of the long-term impacts of prehistoric human campfires, starting at the dawn of time!

The ecological impacts of campfires may be the first unique ecological impact of early human populations, though perhaps early burning of forests to attract game was earlier. Either way, interesting food for thought!

Reference:
Hegetschweiler, K., N. van Loon, A. Ryser, H.-P. Rusterholz, and B. Baur. 2009. Effects of Fireplace Use on Forest Vegetation and Amount of Woody Debris in Suburban Forests in Northwestern Switzerland. Environmental Management 43:299-310

Whether its California, Oregon, the Pantanal, the Amazon, Argentina, Australia, Siberia, FIRE MANAGEMENT--moving beyond essential emergency measures to manage changing fire regimes across landscapes--must become a higher priority for the scientific community and policy-makers.