Our landscapes are reflected in the clouds 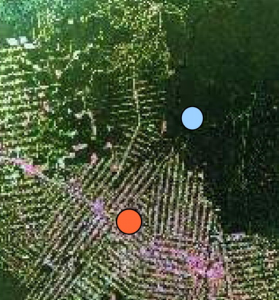 When we change our landscapes, we change the clouds above and thereby climate - this from new evidence just published by Jingfeng Wang (Wang et al., 2009) and a team of researchers in Rafael Bras’s climate lab at MIT. By observing cloud patterns and other climate parameters in deforested areas of Brazil, their work demonstrates that local and regional patterns of land use change substantially altered cloud patterns- in this case by deforestation in the classic “fish-bone” pattern” along new roads in the tropical moist forests of Brazil.

While the global implications of this work remain to be examined fully- especially the degree to which these mesoscale patterns are sustained at global scales- there is no doubt that local tree cover patterns influence regional climate. This adds to the list of anthropogenic climate effects caused by human use of land, which also include the “urban heat island” effect- local patterns of increased heat and moisture over cities - not to mention changes in carbon balance causing carbon to build up in the atmosphere.

I can only wonder whether global patterns of local land cover alteration by humans are having a net warming or cooling effect on the planet. And don’t forget to stop mowing that lawn!