China’s villages are changing the world 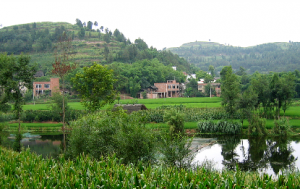 If you still think of rural China as remote, traditional, and unchanged for millennia, think again. China’s ancient village landscapes are among the most dynamic and densely populated on Earth, with a global extent more than twice that all of Earth’s cities combined (2.5 million km2 vs. ~1 million km2). It should therefore come as no surprise that long-term changes in China’s village landscapes are changing the planet (Ellis et al., 2009).

Global changes might seem to be the result of big, extensive changes- like deforestation of the Amazon or the growth of large cities- and indeed these are important global changes. But what if 200 million farm households decided to build a larger house, plant an orchard or a few trees for fuel and timber, and stopped farming their worst farmland and let it regrow? What if the government extended more intensive and productive agricultural technologies, built new roads, irrigation systems and other infrastructure, and even developed village and township industries? Add in a near doubling of rural populations and that’s the main story of China’s ancient village landscapes over the past 60 years. While the building of a rural house or the abandonment of a single field might cause only a very small and local change in land use, our recently published field study of village landscape changes across China, from the 1940s to 2002 shows that the sum of all of these small intensive changes are changing the planet (Ellis et al., 2009).

Our first discovery was that most of China’s buildings and roads are not in its cities. In 2002, the builtup area of China’s village landscapes was at least five times greater (0.18 million km2) than the total area of all of China’s cities combined (0.03 x million km2). Just the increase in village builtup area since 1950 (0.14 x million km2) is four times greater than China’s urban area. If this seems impossible, think about it. 800 million rural people, mostly in villages, versus 500 million in cities. And like most rural populations, these are far more spread out than urban populations: more road area per person and a far larger housing footprint per capita (most city people in China live in large multi-story apartment blocks).

More surprising still, we observed that over the same period that total grain output increased by a factor of 4 or more, the total village area covered by annual crops (mostly grains) declined significantly, by 10% overall since the 1940s . Given that village populations have nearly doubled and village agriculture still feeds most of China’s huge and growing population, this is certainly not what we expected.

But our most surprising observation is that trees and other closed canopy woody vegetation now covers about 9% more of China’s village land area than it did in the 1940s. This increase in tree-covered area adds up to more than three times the total area of tropical forests lost each year to deforestation as of year 2000. While these trees are not really forests- much of this is orchards, plantations and small patches of a few trees, when averaged over 60 years, this regeneration of woody vegetation is still globally significant in area- about 1/20th of the annual rate of tropical deforestation. Though the recovery of woody vegetation across China’s villages is readily explained by cropland abandonment, tree plantings and regrowth around new buildings, by new orchards and other woody crops, and by improved forestry practices in hilly areas, this is just not the kind of long-term change we expected for ancient, densely populated agricultural landscapes when populations double and agricultural output quadruples.

Taken together, long-term changes in China’s village land use are large enough to influence global climate by changing changing carbon storage and surface heat balance. Yet most of these changes are too small to see using conventional methods for measuring changes in land cover and land use using satellite imagery- and they have therefore never been measured until now. Such are the global changes caused by intensive land change processes- the cumulative result of huge numbers of small changes in land management made by hundreds of millions of rural households living in densely populated anthromes.

For thousands of years, most Chinese people have lived in densely populated agricultural villages that differ strikingly from the wide-open agricultural regions familiar to North Americans. Since the 1940s, their story has been one of intensive change- ever increasing buildings, roads and other infrastructure, shrinking fields with ever more intensive use of agricultural inputs, and major regeneration of woody vegetation and trees- in recovering forests, plantations, orchards, and small patches of trees around houses. One would expect that many of these changes may also be occurring across the more than 5 million km2 of village landscapes outside of China- in India and other regions. Expanding areas of buildings and roads might seem like urbanization, but globally, their greatest extent is still likely rural.

While the changes we observed from the 1940s to 2002 differed from what we expected for rural China, they agree well with what has been seen in other regions experiencing strong economic development, even in the USA. Nowadays in China, farmers and their children are leaving the countryside for the city and those remaining continue to intensify their use of agricultural land- leaving marginal lands to recover. As a result, urbanization seems to be the main force driving recovery of vegetation on the least productive agricultural lands- the so-called “forest transition”. An interesting development paralleling what Stewart Brand summarizes in his new book- urbanization is green!

We can hardly wait to return to our sites in China to witness the changes since 2002!

> More about our China research project